Probe Capitalism starts with the observation that we are not producing enough probes that carry life to other planets, and ends with producing the right amount.

Where \(Capital' > Capital\), gained by the profit of producing a good. The number of goods produced is intuitively proportional to the input capital–the more you put in the more goods you get out:

Where k is an arbitrary constant relating to the profit of each good. Taking the rate of the above gives us:

The solution to this differential equation is of course:

Where C is some arbitrary constant. Rendered graphically: 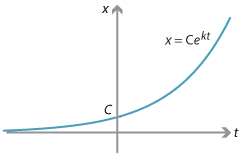 Now, capital itself does not actually perform the task of fashioning the good. Money as such is an abstraction, something capable of being used to drive labor. We can then recast money as an abstraction over energy expenditure. The act of laboring will cost some amount of joules in human labor, and some amount of joules of available energy. If energy is proportional to capital, then the above graph also renders energy usage.

This type of exponential energy growth can only occur when there is excess energy in the environment, such as those stored in fossil fuels. If positive feedback loops exist purely for the accumulation of more capital, energy stores will be emptied in this pursuit. For instance: if running computations returns money, then on the whole we will run our stocks of computer chips into the ground trying to run more computations that make money. There’s got to be a better way!

Let us amend our initial feedback loop. First, our new capital is not be stored except to be used in production of the good:

Where \(Good' > Good\), in that more goods are produced per unit of capital. If producing the good produces more capital, then we turn around and produce more of the good. Unlike when capital is the goal, we immediately recognize that we do not want to maximize the number of goods produced. At its limit doing so would turn the entire Earth into paperclips. It is no small feat to produce the correct amount of goods! If we are drastically under-producing a particular type of good, it will take us time and experimentation to find the right structure for its production. At the point where we have breached the energy barrier to the correct amount of goods production1, the positive feedback loops of capital are balanced by the negative feedback loop of producing the correct amount: 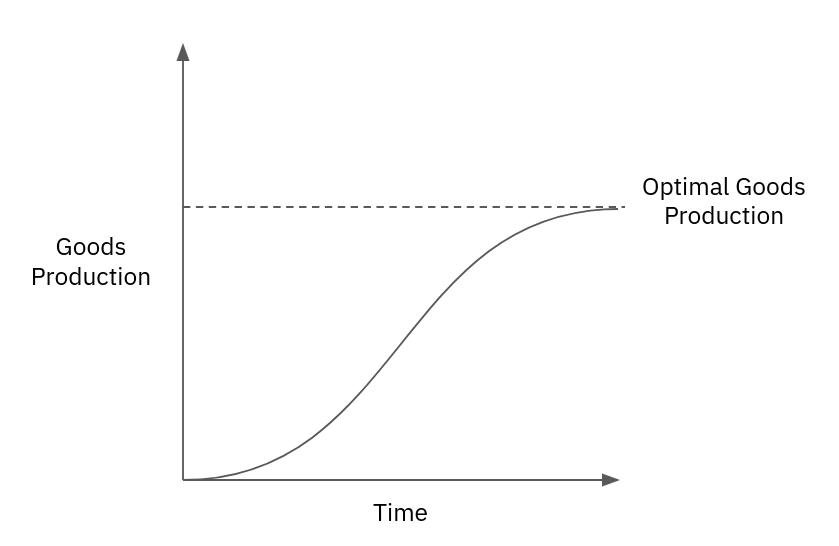 We are currently producing zero probes capable of carrying life to other planets. To fix this we need a capital engine. In the same way that SpaceX sells rockets in order to get to Mars, a probe company would want to sell probes. This company would be an ulta-long term, high-variance investment. As such, crypto is an appropriate mechanism for capital raising. There are two broad trends when it comes to the value of a particular crypto asset. The first is that the value of a asset is proportional to some expected return on investment (e.g. $SUSHI). The second is that the value of an asset is proportional to its status (e.g. Cryptopunks).

A $PROBE company offers both. The ultimate goal of $PROBE would be to proliferate life first through the Solar System and eventually the stars. A $PROBE hodler does so in order to be recognized as first movers, to be the cause of life spreading. The man who holds a million $PROBE from inception to launch should be recognized with more than an NFT, their name will be etched into the housing! At the same time, $PROBE would be a general probe company as a capital-producing engine. As such, the value of $PROBE will be proportional to the revenue of the company. Tesla is an example of an existing company whose stock is a benefactor of the same dual valuing.

I must admit it is tempting to try and advance such a company. I suspect there is a market for grand endevours powered by crypto, an appetite for extreme risk-taking in the pursuit of true status and not .pngs. At the same time I know no probe builders, no people looking to exit SpaceX–but I could do the firmware!