This and The Fall of New Athens are companion pieces of theory-fiction written in collaboration with Samuel Barnes. Initiated from the same prompt they cover the optimistic and pessimistic cases for break-off communities respectively.

Alan was having coffee on his porch when the Internet ceased to be. The prairie remained the same so he only learned of this three days later, when Martin came to pick up a freezer’s worth of bison meat.

“And the rest of the world?”

“From what little we’ve gotten on the shortwave…” The crinkling of the skin around Martin’s eyes was too subtle for any webcam to pick up, but told Alan everything he needed to know.

Here’s what happened: while tripping on a cocktail of half of all PiHKAL’s recipes, members of haxxl0rds.RO collectively hallucinated buffer overflows afflicting most of Cisco’s catalog. In short order every Cisco router on the planet found their routing tables replaced with the Chinese characters for “die gwáilóu scum.” Unamused, a Mossad contractor replaced all Huawei firmware with the text of the Declaration of Independence. Lacking any connection to its command servers, the Chinese APT malware living in Siemens power transformers shrugged and directed 180,000 volts into sensitive control equipment, darkening the power grid. All available X-37Bs were scrambled to knock out Russian communications satellites, the debris of which did not discriminate in picking off the rest.

The global web shattered into patches, the final act of the Communications Age.

The warm light of the sun and a cool morning breeze tickled Rob’s eyelids as he laid resting, wondering how long he could get away with being a lazy piece of shit. It was coming up on 45 minutes already since his alarm went off and he had definitely decided on getting up in under an hour. He was just about to commit to starting that habit tomorrow when the urge to stare into the abyss sprang forth, and with a few lazy bed smacks he found his phone. However, instead of the expected stream of psyops and flaming: wifi up, no Internet. Strange, but not unheard of. The cell network was spotty out here (he felt invigorated by the lack of 5G), and Intrastellar DSL, LLC’s two employees occasionally didn’t notice that things were down for a few hours.

The lack of outrage slowed his rise from bed, but he eventually made his way to his computer by way of the kitchen. A browser opened out of habit was closed. No outside connection meant no work e-mails, and no work e-mails meant it was project time.

New Athens had two classes of workers, the digital nomads and the physical laborers. The town was largely owned by the remote workers (mostly software engineers). The excess capital gained by living in a cheap remote area was largely plowed back into buying shares in the town itself. The town itself managed the distribution of funds towards building human capital. Laborers were arranged in guilds–the first hires were old hands in farming, then construction and maintenance, and so on.

Once the work outstripped the ability of the masters themselves, young men were hired as their apprentices. Capable (though not yet competent) men were not in short supply given the overall state of the economy, universities, and culture. Indeed, their propoganda fed on this: 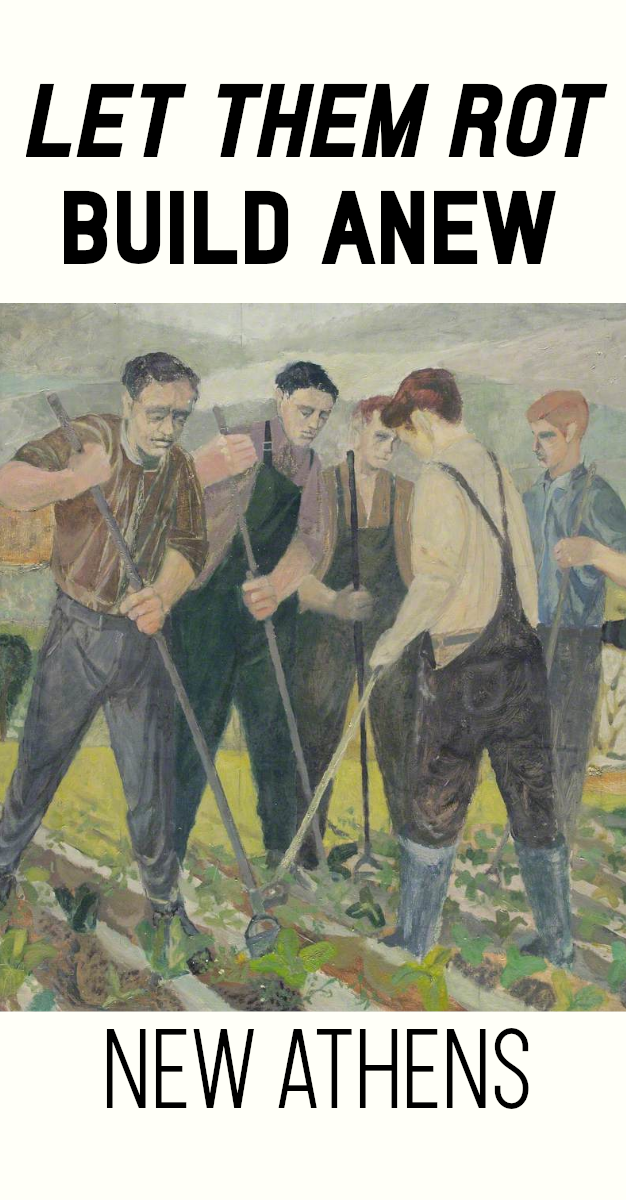 A common habit of the software engineers in town was to attempt to contribute to the smooth operation of New Athens itself. The results were invariably hacky, half-finished monstrosities that occasionally saved time when it worked. While this was the type of software venture capital goes real wild for, the laborers had the power to avoid using it in favor of methods that worked reliably. Rob’s projects were about trying to communicate with plant cells. He was always a bit on the weird side.

Rob finally had his flow interrupted to answer a knocking at the door of his quarters.

She was frustrated and not in the mood for conversation.

“Rob! Louis wants to see you. Where the hell are you? You know about the Internet, right?”

Louis was one of the founding members of New Athens, and the defacto leader. This was purposefully not enshrined in any system, everyone just listened when he spoke. If they hadn’t, New Athens wouldn’t have happened.

“Hey Suzie. I saw it was down, yeah. What’s Louis want with me?”

In the town center the men and women of New Athens had gathered. Those drawn to politics clustered at the center debating what to do next. Louis stood offset from the group, his head cocked, eyes exploring the ground. Rob and Suzie pulled up along him to listen in.

“I just don’t see how things return to normal in two months. In fact, I don’t think they ever turn back into anything resembling the way things were before. During COVID the system tried to move, tried to operate and– you know how well that went. That system, all those institutions, they could barely move a muscle. There’s no way all those things are stone cold dead.”

“This is much different compared to COVID! This is life or death for everyone. People weren’t shaken out of complacency with COVID, that’s why nothing really changed. Once everyone realizes they have to work together or they starve, they’ll work together. They’ll fix what matters locally. New, better institutions will rise out of this.”

“Both of you are assuming the state ceases to exist. Why should it? The military will be the first one to figure out how to re-network and the vampires will exert control by force. That’s the confrontation we need to be preparing for, when they come to try and nationalize our stuff. If others join us, they’ll stay away. We can carve out our own state.”

“You’re thinking way too large. Think about just how much of what’s here came from out there. All of our medical supplies, building materials, electronics, clothes for Christ’s sake– that’s all from out there! Without all that, we won’t be able to cobble together a state. We’ll have regressed to primitivism.”

“Regressed? People were happier then! People’s lives were filled with real struggle and that filled their lives with meaning. This should be a moment of joy! A return to communion with the land! Forget computers and plastic water bottles. I’ll weave myself hemp clothing and whistle a tune while I do it. Don’t concern yourself with the state, either. They’ll be too busy worrying about other states, leaving us free to frolic as we please.”

“I’m more worried about our neighbors. They’ll see we have not only food, but the means of generating it. If we aren’t able to defend it by force, they’ll take it through any means necessary. We need to be able to defend what we have here.”

“There’s an easy solution to our neighbors: help them out. There aren’t that many of them, we can send them some of our harvest and keep them happy.”

“We’ll have a lot more neighbors if we just go around and hand it out for free.”

“Just send them the Wikipedia article for gift economy– wait.” The group breaks out into laughter at this, and Louis takes the chance to wave Rob aside, out of earshot from the debate.

“Rob, I want the status of New Athens with respect to energy independence. Not the status at this moment. The status is bright red and pear-shaped across the board. I want a detailed report of both our capabilities and our needs. Collect it as we adjust to this mess.” Louis continues, accustomed to being listened to.

“I do think this is an opportunity to find out what our actual needs are. Not so long ago humans demanded the energy of a couple buffalo a month. New Athens was consuming tens of megabuffalos a month!

“We can no longer assume the availability of cheap oil, cheap electricity, cheap access to resources and material. Yet: everything we have was made with those assumptions. There was always going to be another iPhone, one didn’t need to last a thousand years.

“This is the start of a new engineering frontier. What do we do when our stuff starts to break? What will we replace it with? How will we make new machines? Why those machines? ‘It yields a return on investment’ isn’t a reason anymore. Only ‘this allows us to persist, to live well.’ That’s exciting to me Rob. What do you make of our situation?”

“Well… we’re self-sufficient in the ways that matter. Our farms and livestock will keep us alive. Engineering though… Where will we get all the resources required? I’m a pessimist when it comes to the state of the rest of the world. Those supply lines are too integrated with the communications network, too integrated with the entire world order. They won’t be able to pull themselves together before the food riots start.”

“Short term thinking my friend! Should it indeed get that bad, and it very well may, the ruins of Kansas City will hold ample resources for the picking. This isn’t engineering to deliver a product in two quarters, this is deep time engineering. Think in terms of years, decades, centuries!”

“Aha, now we’re talking! I didn’t take you for the conquistador type.”

“I’m not. To survive we have to stabilize our surroundings. We don’t export bullets, but culture. Whatever communities form around us, send them food, breeding pairs of buffalo and cattle, and two able bodied men educated in farming and how we run New Athens. They’ll be desperate for answers and welcome us with open arms. We replicate. The more they become like us, the more they like us and the greater access to resources and expertise we’ll gain. Then we can start engineering, doing as Bell Labs did, picking up all the intelligent men from across the Midwest.”

Louis scratches the side of his cheek. “Franchising New Athens? Yes… perhaps.” He laughs suddenly. “You know, a day ago we’d be able to access the thoughts of millions of people on what to do. A swirling hivemind that would build a strong case for doing A and an equally strong case for doing not-A, repeated for B through ZZ.”